Best Aquatic Plants to Get for a Goldfish Tank | iPetCompanion

Best Aquatic Plants to Get for a Goldfish Tank

A bare and empty tank is no fun for your goldfish to live in. That is why putting the best plants for goldfish in their with them, will provide them with a fun environment to swim around in and thus allow them to live a happy an healthy life – something that we all want for for our goldfish. However, it can be difficult to know which ones to put into your goldfish tank, as they have to be able to survive both your goldfish and the environment that they live.

To help you identify which live plants are the best to put into your goldfish tank, we have done the research so that you do not have to. As part of this, we have put together a list of Our Top Picks, which contains some of the most suitable live plants out there. For each of these we give an honest review and state any pros or cons that these aquatic plants have. From there we give answers to some of the most frequently asked questions regarding live plants and fish tanks. We finish off by making a recommendation as to which of these live plants is the best to go in a goldfish tank.

The Best Aquatic Plants to Get for a Goldfish Tank: Our Top Picks 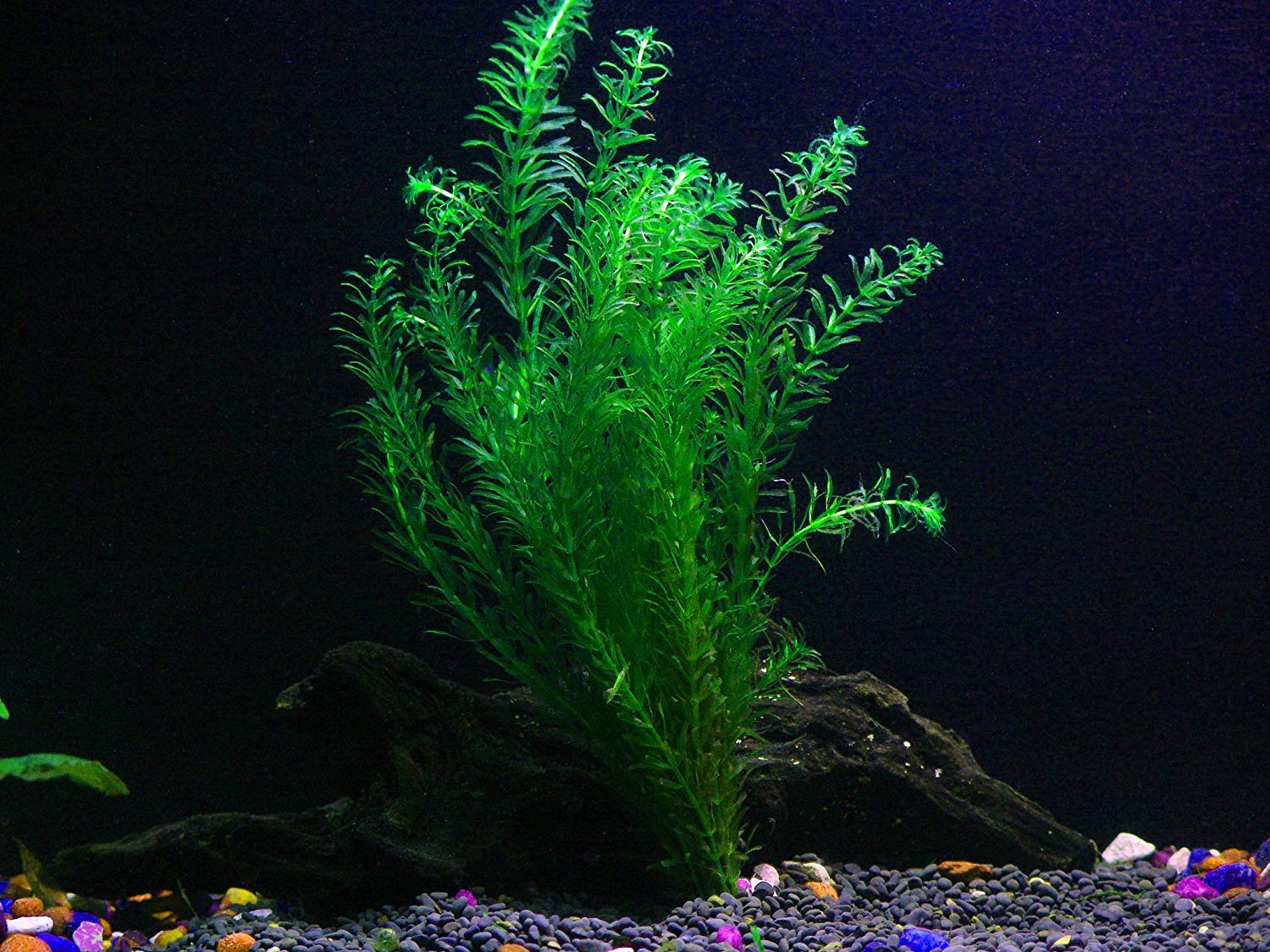 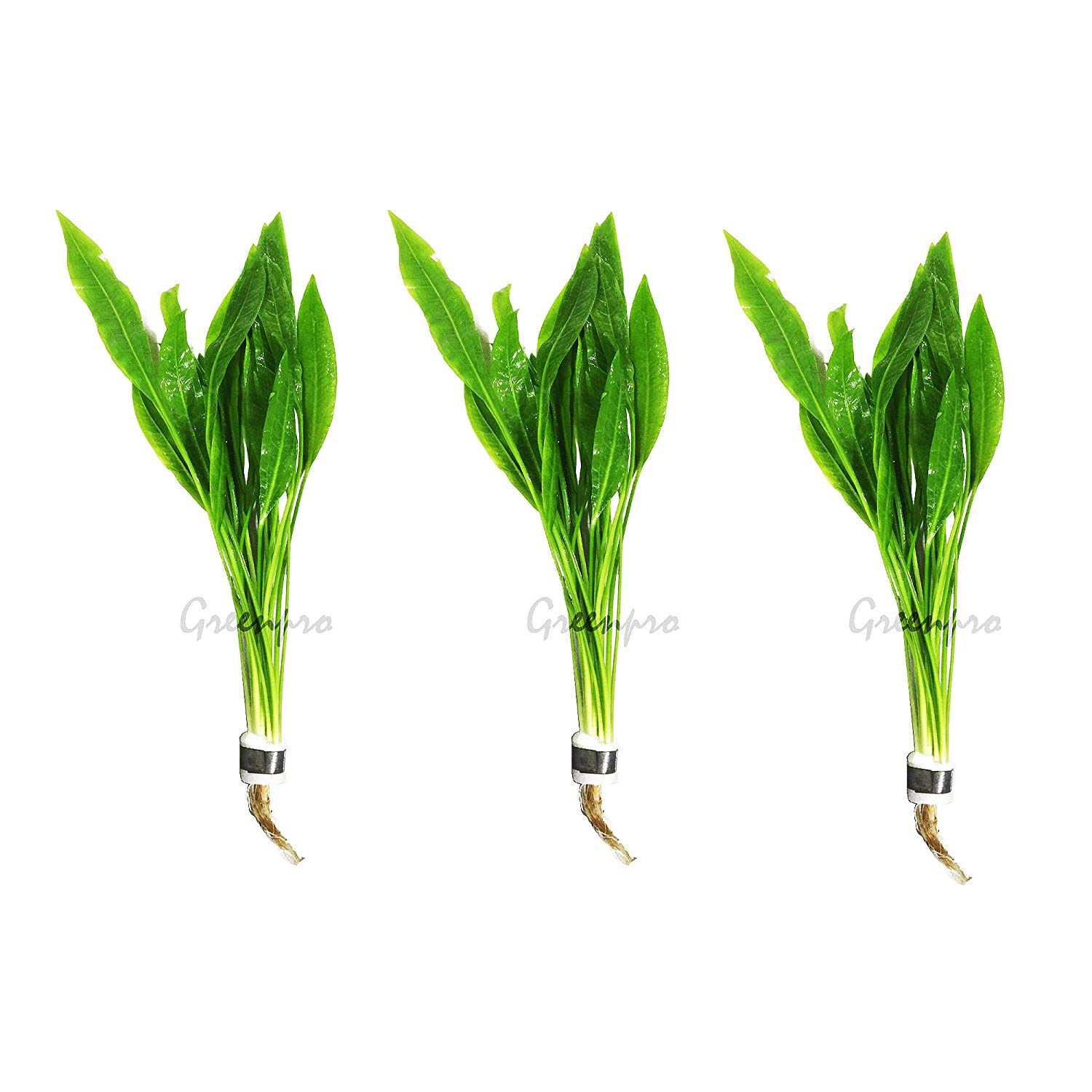 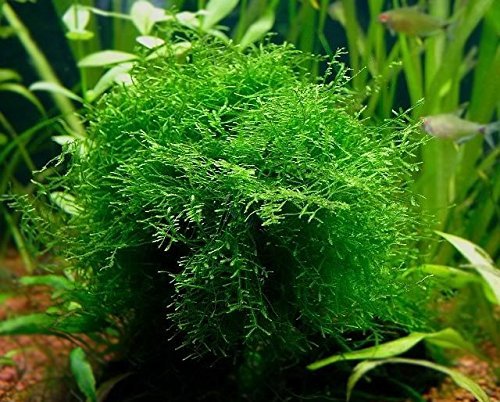 These are the perfect aquatic plants to couple up with your goldfish, as it is comfortably able to survive that environment.

It will also provide your goldfish with somewhere to rest in and get shade. What is good about Anacharis is that it is really simple to look after and care for for.

However, there is an issue in that not only will your goldfish sit under it, but they will also eat it, as it is one of their favorite live plants to devour.

Despite the fact that it grows really fast, it may not be fast enough to establish itself if it is kept with lots of goldfish or with any that have large appetites.

To combat this issue, it is advisable to introduce some large and fully matured Anacharis to your aquarium, as this will work to help provide some offset to the rate that it is being eaten at by your goldfish. 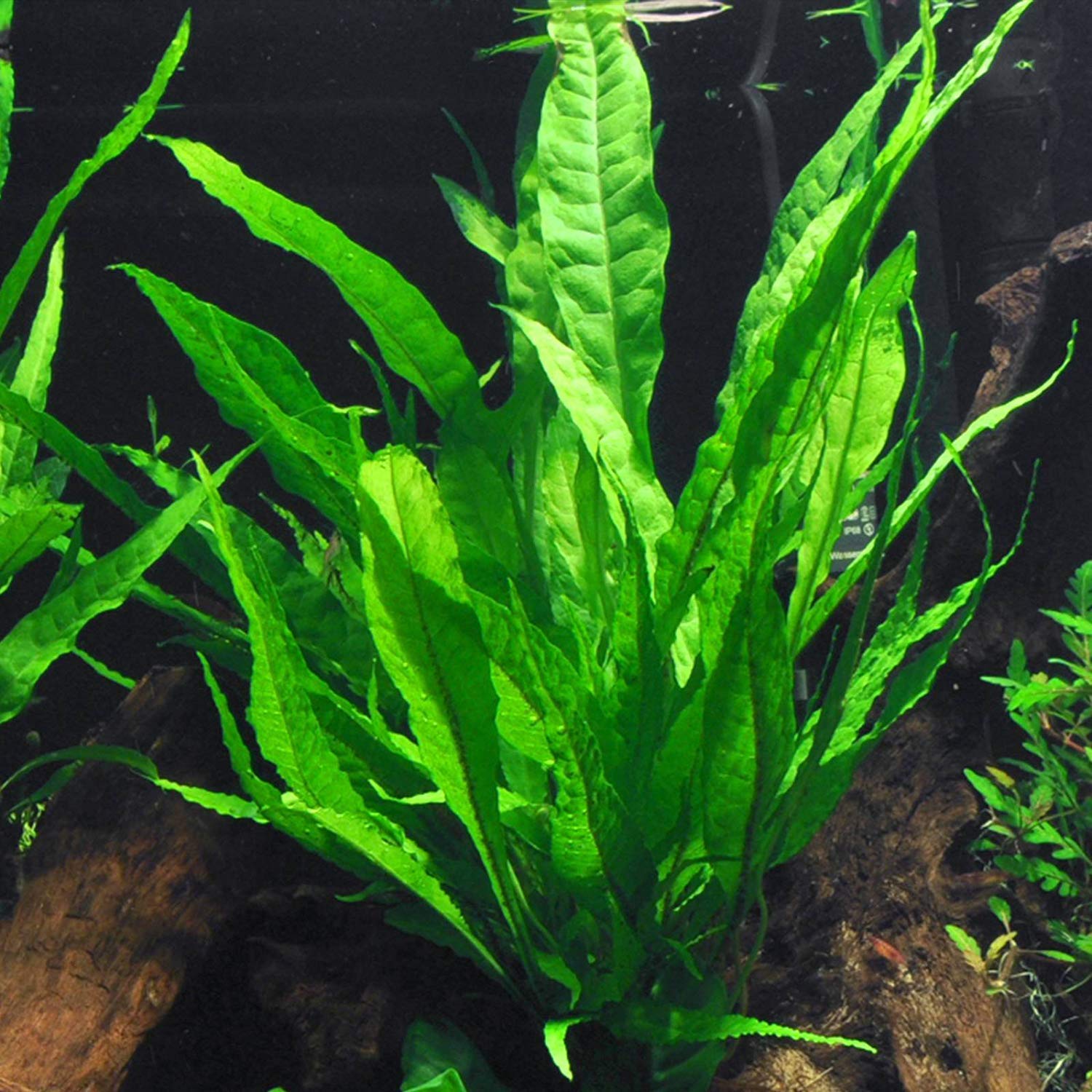 For numerous different reasons, Java Fern is the ideal aquatic plant to put inside of a goldfish tank. The main reason, however, is that Java Fern will not be eaten by your goldfish because of their hard leaves.

This means that they will not have to be replaced like some other live plants. There is no need to bury the Java Fern in substrate and instead can tied down to a piece of driftwood or a pile of rocks.

Being anchored to these helps to stop the Java Fern from being knocked around and damaged by your goldfish. Others reasons as to for why this is a good aquatic plant choice include the fact that it can survive in various levels of light, in different water temperatures, and in varying pH levels of water. 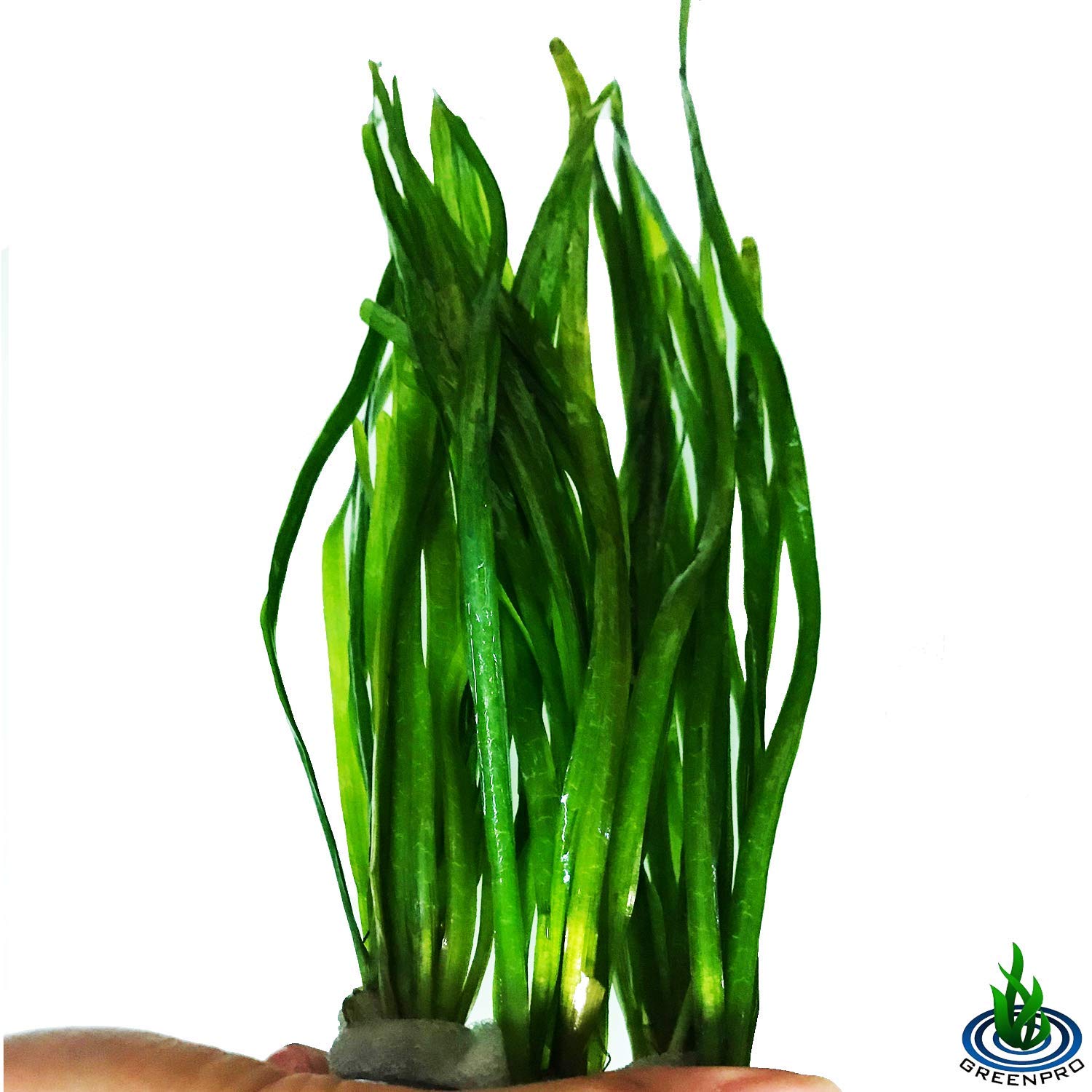 Although at first glance it may resemble grass, Vallisneria Spiralis actually has much broader and thicker leaves, and can grown as tall as 30 inch in height. In some instances it has been known to grow even taller than that.

Because of this, it requires regular trimming and maintenance to stop it from getting out of hand. Although, your goldfish should be able to help with this as they do enjoy snacking on the leaves of these aquatic plants.

Rooting Vallisneria Spiralis does not need to be done in a substrate of fine gravel, but it should be noted that the roots of this aquatic plant do grow really quick. So, given a week or so, it should have a root system in place that is robust enough to withstand being moved around by over zealous goldfish. 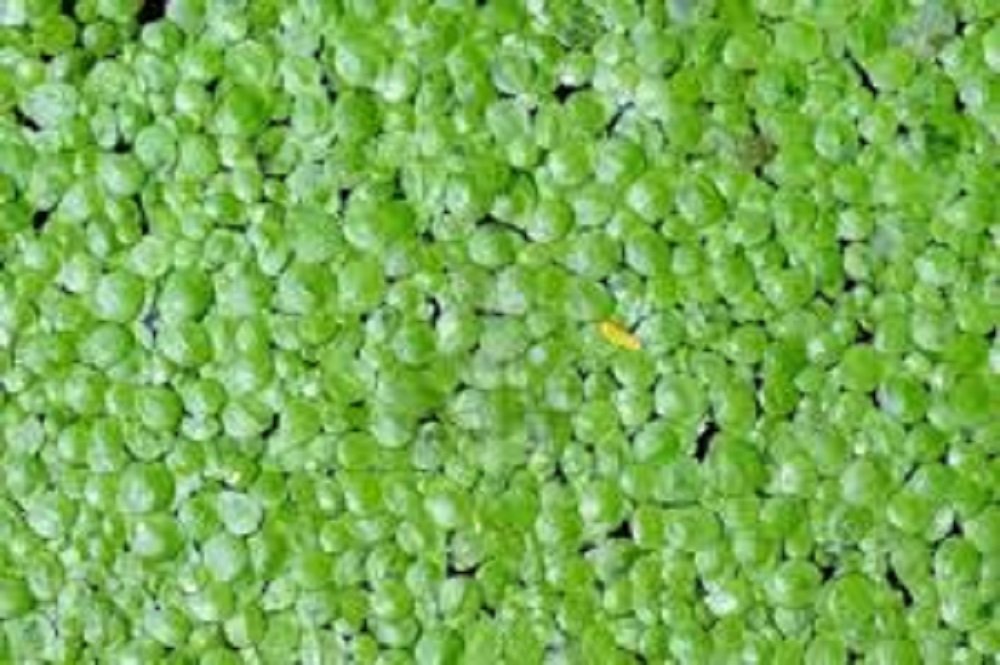 This aquatic plant has a reputation for for growing super fast and being able to take over a goldfish tank in just a few weeks. When it does this, it will block out most of the light, which is not ideal for for your goldfish.

However, the small leaves and the fact that this floating aquatic plant does not need to be rooted, makes Duckweed really easy to look after and so maintaining it so that it does not get out of hand is relatively easy. It will grow on top of the water, similar to how Lily Pads do.

Your goldfish will also help with keeping the Duckweed from taking over the aquarium, as they love eating on the leaves, which are tasty and soft.

These aquarium plants grow at a moderate rate in regular conditions. In conditions where there is lots of light, it will grow much faster, but will grow no slower when in darker conditions. Despite the fact that your goldfish may occasionally nibble on it, you will not need to constantly replace the Java Moss as it will not be eaten by them, and will grow back fast enough before it has all gone. This is especially true if you take good care of these aquarium plants.

Where Java Moss thrives in a tank is anchored to either a piece of driftwood or a pile of rocks. The fact that it is anchored helps to stop it from being dislodged and knocked out of place by any of your goldfish.

As previously stated, these aquarium plants can survive in all lighting conditions, as well as both warm and cold water. Additionally, it can withstand most pH levels also.

The leaves of Amazon Sword plants are edible to goldfish, which can be a problem. However, because they grow fast, as much as 16 inch tall, this should offset the speed at which it is eaten away. This will only become an issue if you have lots of hungry goldfish that are eating these plants quicker than it is growing.

Because the roots of Amazon Sword plants grow quickly and become well anchored to the substrate, they will not be easily knocked over and dislodged by your goldfish. In addition, these plant are really nice looking and will add some good aesthetics to your goldfish tank.

The water parameters and tank environment that these live plants thrives in matches those of goldfish, so the two go together really well. Thanks to this, it is very easy to look after and care for for.

The broad leaves on these plants give your goldfish somewhere to sit and hide under.

We have taken a look at some of the best aquarium plants to put into a goldfish tank and now it is time to provide answers to some of the most frequently asked questions relating to live plants and goldfish. To be able to answer these we have done extensive research and spoke to the experts in order to provide you with top quality answers and advice.

What plants are good for goldfish?

Because goldfish will eat pretty much anything (including live plants), and a lot of anything, choosing the appropriate live plants to put into the tank with them is important. If you choose plants that grows slowly then it is likely that they will be eaten up before prior to growing any new off shoots, and so will disappear completely from the fish tank. However, there are some types of plant out there that do grow fast enough to not be eaten into extinction and are able to withstand a bit of nibbling from your goldfish.

The problem with some of these faster growing live plants is that they can get knocked over and dislodged from the substrate by your goldfish as they dig into the gravel. If this happens, the plant becomes uprooted and starts floating around your tank, which never looks good. Some live plants can be tied to ornaments, such a piece of driftwood or a pile of rocks, in order to stop this from happening. Different live plants thrive in different levels of light so it is important toconsider how much light your tank is exposed to before choosing a plant to put into it.

Do goldfish need plants in their tank?

All goldfish do better when living in a tank that has plants in it. These can be either real or fake, it does not matter. As previously stated, if you decide to use real plants, then you need to seriously consider what plants you put in there with them. They need to be not only compatible with the goldfish themselves, but also with the water temperature and water pH level.

What goes well with goldfish?

IThere are fish out there that go well with goldfish, although not every species is appropriate. When deciding on what fish to put into goldfish tanks, there are certain things that you need to consider, such as are they able to not only survive, but also thrive, living in the same water conditions. For example goldfish prefer to live in tank water that is somewhere between 65 Fahrenheit and 70 Fahrenheit, so any other fish that you want to put into goldfish tanks with them, should also be comfortable living in this temperature water. 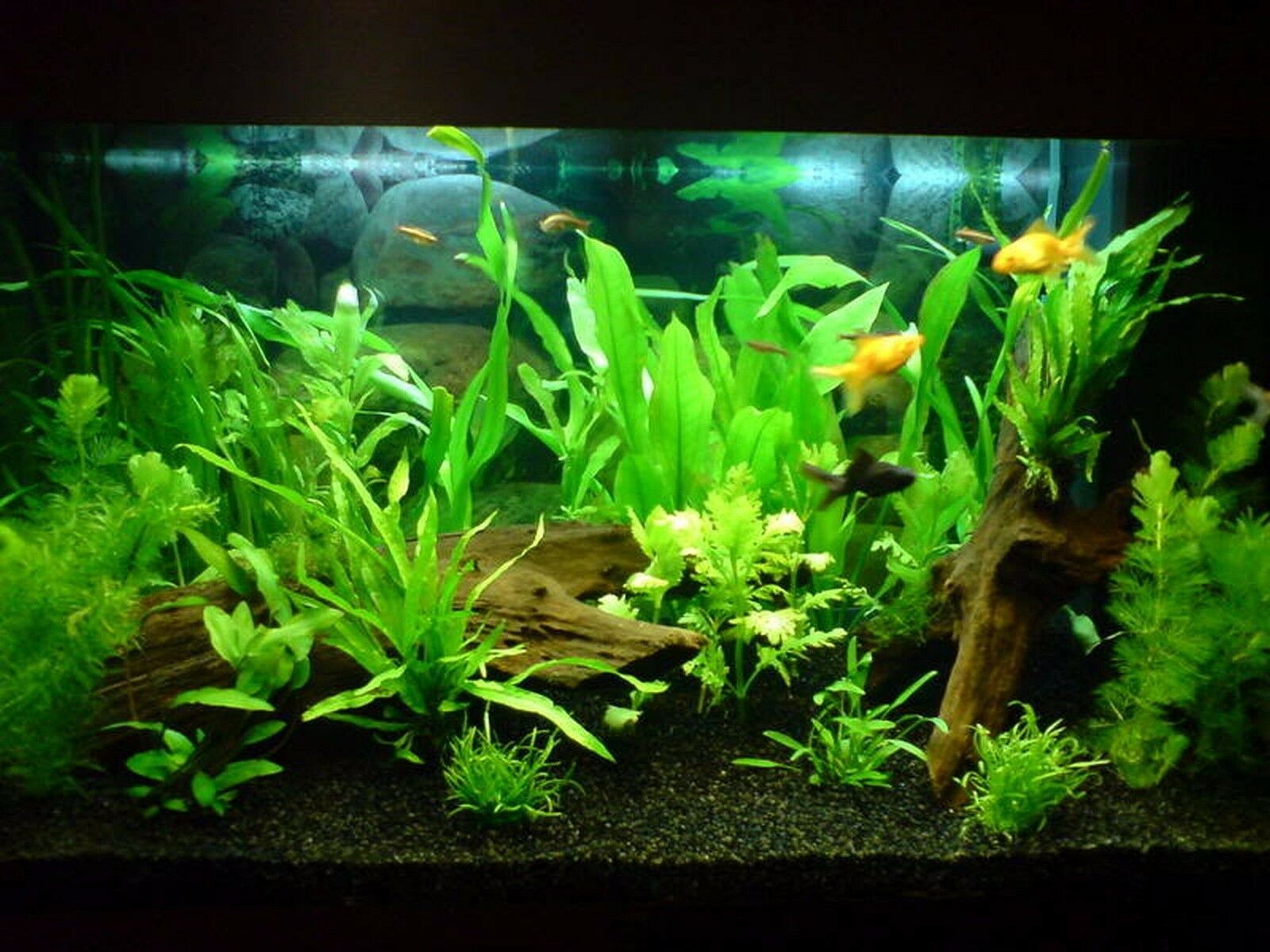 Another thing to consider is if the fish will get along with goldfish. By this we mean, they do not take up too much space so that the goldfish are unable to grow, the goldfish will not be able to eat them, and that they will not injure the goldfish. Some examples of fish and other marine animals that meet all of these criteria include, Red Cherry and Ghost Shrimp, Apple Snails, Zebra Danios, Dojo and Weather Loaches, Bristlenose and Rubbernose Plecos, Rosy Barbs, White Cloud Mountain Minnows, and other Goldfish.

As we previously stated, goldfish will eat pretty much anything. This is also true of most pond plants for goldfish, including Water Sprite, Banana Plant, Duck Weed, Fanwort, Water Sprite, Water Wisteria. However, there are some out there that they will not eat. These include, Anacharis, Anubias, Hornwort, Water Onion / Onion Plant, Water Sprite and Waterweed.

At this point we are now ready to state which of the aquatic plants for goldfish that featured in the list of Our Top Picks is the best to put into your goldfish tank. However, before we do, we should reiterate what has been stated throughout this review in that the plant that you choose needs to be able to both survive and thrive with not only goldfish, but with the environment that it is put into.

With this in mind, we decided that Amazon Sword is the best aquatic plant to get for for a goldfish of all. This is mainly because the roots of this plant grow really quickly, so it can soon become established within a tank. As well as this, it is able to withstand most environments and is super easy to look after and care for for. The only slightly downside is that goldfish like eating this plant, so if you have lots of them in one tank and they are really hungry, they could possibly eat all of the plant before it has chance to grow back.

About the Author Amber